March 2020 features and changes with WordPress 5.4 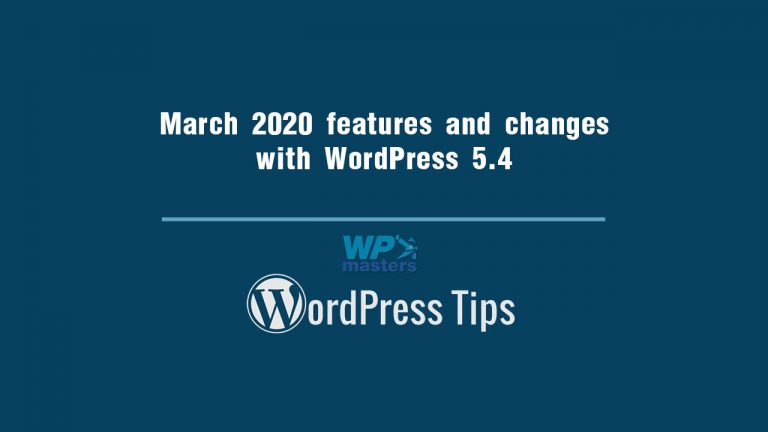 The WordPress release schedule is poised with a new one with March 31st 2020 with a final list of new features within the release candidate.

Considering this, we can provide insight into these new features and changes with a number of our own tips and suggestions.

Which features and changes are slated WordPress 5.4

The WordPress 5.4 update packs a ton of new features, improvements and bug fixes largely catered toward the block editor, additionally integrating a number of Gutenberg plugins into its core.

Besides the block editor, the Site Health Tool and REST API are also improved, while we won’t be discussing any delayed features which will be included in the later 5.5 update.

The Gutenberg plugin versions are integrated directly into the core, meaning you will find many new features, enhancements and bug fixes in the block editor with 5.4 update.

The most notable Block Editor features and enhancements are:

Let’s take a look into these features individually.

Previously known as Social Links, the new Social Icons block provides a quick and easy way to add links to your social media presence. In this release we can confirm that the block is now released as a stable solution.

The Social Icons block is provided with three premade styles for your visual customizations: Default, Logos only, and Pill shape.

Be aware that this block was originally introduced with Gutenberg 6.5 and may not work correctly with an outdated version, so we would like to suggest using 7.5 or later version.

The two preset styles can be adjusted with additional options to provide a more unique appearance for your buttons.

The expected update 5.4 includes additional control settings for Buttons Block with gradient backgrounds and several presets which can be adjusted to your liking.

The Improved Welcome Guide Modal catters to new and returning users with need for some basic information about how the block editor works, with link to additional online documentation.

Take note that this Modal will appear only with the first run of the updated WordPress 5.4 and if you need it again you will have to look for it manually in the More tools & options menu.

If you have deployed a fresh WordPress 5.4 or access it through a new device the editor will display in a fullscreen mode by default, while you can toggle it ON and OFF tools & options menu.

Because this feature is device dependent, it is stored only locally, while a future update may enter it into the database, making the user choice persistent in any context.

Arguably, having the editor in fullscreen mode by default is not that  appreciated among the WordPress community as it is considered to be potentially confusing for beginners and non-advanced users.

Writers of long-form posts will appreciate additional text color adjustments made available in the rich Text Block, which until now had to be hardcoded in HTML mode even for single words or strings.

Several other blocks have received color-related enhancements including:

Available since the Gutenberg 6.7, and now included with the WordPress core, this new breadcrumb bar makes it easier to navigate blocks.

We can conclude that these new features, changes and improvements are welcome additions as they improve the WordPress functionalities and the UI, by improving the editor’s accessibility and usability and the overall editing experience in general.

This website uses cookies to improve your experience while you navigate through the website. Out of these, the cookies that are categorized as necessary are stored on your browser as they are essential for the working of basic functionalities of the website. We also use third-party cookies that help us analyze and understand how you use this website. These cookies will be stored in your browser only with your consent. You also have the option to opt-out of these cookies. But opting out of some of these cookies may affect your browsing experience.
Necessary Always Enabled
Necessary cookies are absolutely essential for the website to function properly. These cookies ensure basic functionalities and security features of the website, anonymously.
Functional
Functional cookies help to perform certain functionalities like sharing the content of the website on social media platforms, collect feedbacks, and other third-party features.
Performance
Performance cookies are used to understand and analyze the key performance indexes of the website which helps in delivering a better user experience for the visitors.
Analytics
Analytical cookies are used to understand how visitors interact with the website. These cookies help provide information on metrics the number of visitors, bounce rate, traffic source, etc.
Advertisement
Advertisement cookies are used to provide visitors with relevant ads and marketing campaigns. These cookies track visitors across websites and collect information to provide customized ads.
Others
Other uncategorized cookies are those that are being analyzed and have not been classified into a category as yet.
SAVE & ACCEPT