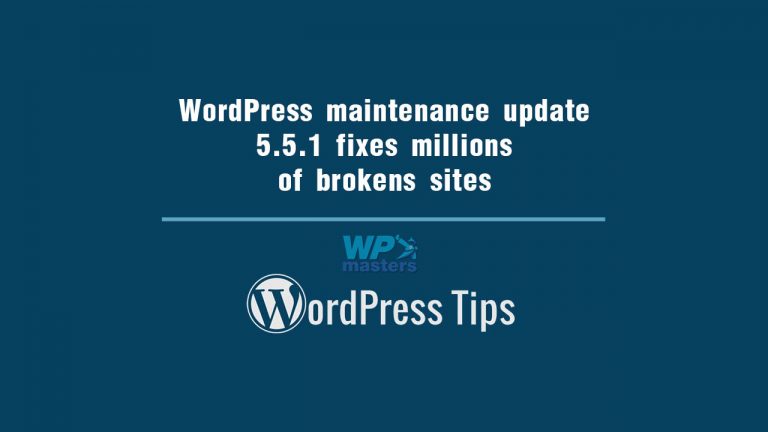 There is no doubt that it is a huge success, but the update to WordPress 5.5 had an unexpected result for many WordPress users. Causing their sites to break, the negative effects of WordPress 5.5 were felt across millions of sites, a truly staggering event.

The later announcement about what exactly went wrong provided a link to a spreadsheet listing hundreds of plugins and themes that were affected.

Now, WordPress is releasing a maintenance update version 5.5.1 which is aimed as a patch to provide time for plugin and theme developers to update their software.

Namely, the WordPress 5.5.1 maintenance release is designed to help stop sites from breaking, though the errors will need to be fixed, meaning that it adds a backfill for the globals (JavaScript objects which were removed) so they no longer cause JavaScript errors.

In fact, this update will alleviate issues for sites only temporary, while plugin and theme developers have until March 2021 to provide a patch so that the next update will not result in another round of broken websites.

Developers are doing their diligent work to fix plugins and themes

Some of the broken plugins with more than a millions of users are:

Other popular plugins that are affected by this issue of users are:

When talking about popular WordPress themes, this issue has affected:

Indeed, some of the affected plugins and themes have already been patched and fixed.

What can you expect when you update to WordPress 5.5.1

While this maintenance update is designed to patch a wide range of bugs that were discovered after 5.5 was released, please note that it is a temporary fix.

For those that rolled back their sites to a previous version of WordPress because 5.5 was breaking their sites, this is the version that should be downloaded as the issues that were discovered have been fixed now.

Knowing that the update will take you only so far as March next year, leaving you with a bit more than half a year’s time, you should aim to get an update from your plugin or theme supplier, or else, find and replace the broken plugin or theme with another and ovoid the issue of broken sites.

Either way, a direct solution for the issues that have risen with WordPress 5.5 must be provided before March 2021 or you will be, again, facing issues with a dysfunctional website.

We use cookies on our website to give you the most relevant experience by remembering your preferences and repeat visits. By clicking “Accept All”, you consent to the use of ALL the cookies. However, you may visit "Cookie Settings" to provide a controlled consent.
Cookie SettingsAccept All
Manage consent

This website uses cookies to improve your experience while you navigate through the website. Out of these, the cookies that are categorized as necessary are stored on your browser as they are essential for the working of basic functionalities of the website. We also use third-party cookies that help us analyze and understand how you use this website. These cookies will be stored in your browser only with your consent. You also have the option to opt-out of these cookies. But opting out of some of these cookies may affect your browsing experience.
Necessary Always Enabled
Necessary cookies are absolutely essential for the website to function properly. These cookies ensure basic functionalities and security features of the website, anonymously.
Functional
Functional cookies help to perform certain functionalities like sharing the content of the website on social media platforms, collect feedbacks, and other third-party features.
Performance
Performance cookies are used to understand and analyze the key performance indexes of the website which helps in delivering a better user experience for the visitors.
Analytics
Analytical cookies are used to understand how visitors interact with the website. These cookies help provide information on metrics the number of visitors, bounce rate, traffic source, etc.
Advertisement
Advertisement cookies are used to provide visitors with relevant ads and marketing campaigns. These cookies track visitors across websites and collect information to provide customized ads.
Others
Other uncategorized cookies are those that are being analyzed and have not been classified into a category as yet.
SAVE & ACCEPT